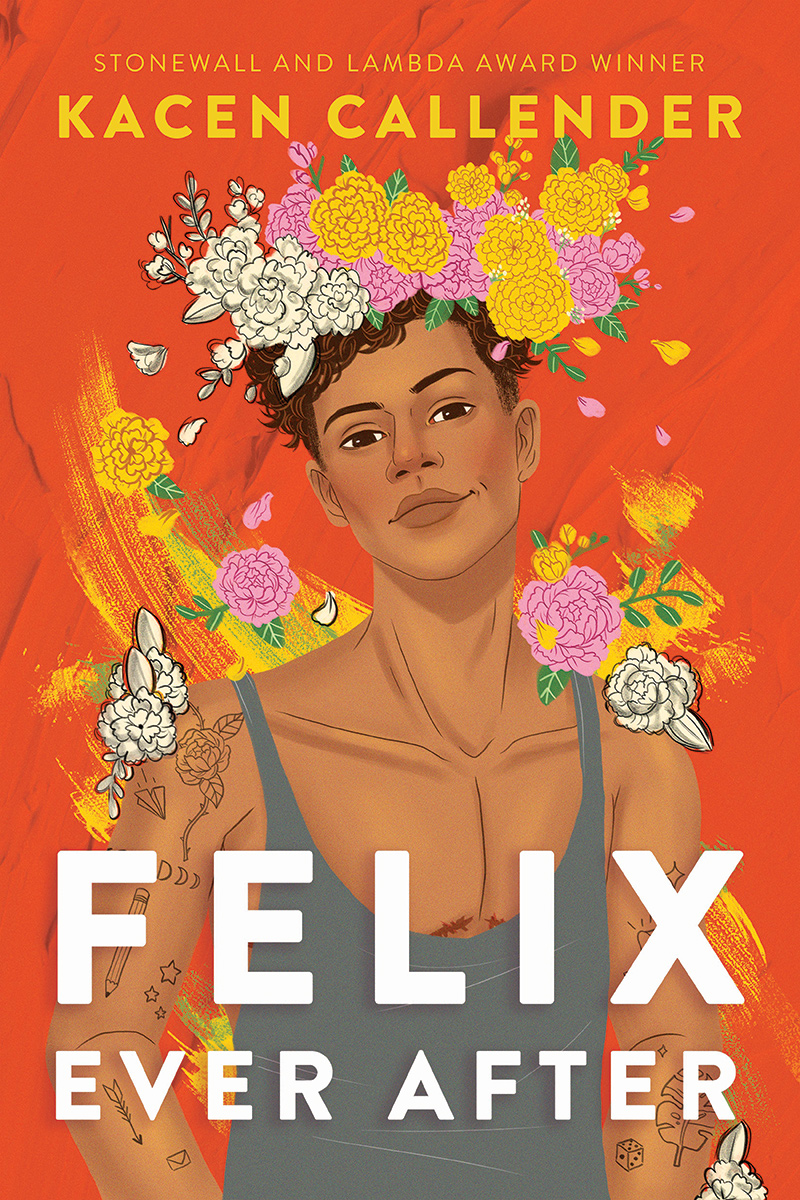 From Stonewall and Lambda Literary Award-winning author Kacen Callender comes a poignant story of identity and self-discovery, layered with romance.

Felix Love has never been in love, and he’s painfully aware of the irony. What’s worse is that, despite being proud of his identity, Felix also secretly fears that he’s one marginalization too many—Black, queer, and transgender—to get his own happily ever after. But when his plans to get revenge on a transphobic anonymous bully via catfishing lands him in a quasi-love triangle, he’ll learn a thing or two about falling in love—and recognizing the love that may have been there all along.

FELIX EVER AFTER is an empowering, compulsively readable trans coming-of-age story with a happy and romantic ending. It deals with issues of gender identity and questioning, especially within the larger LGBTQIA+ community and features a cast of queer main characters of color who identify across the spectrum on their gender and sexuality—important intersectional representation not often seen in YA lit.

SCHOOL LIBRARY JOURNAL – “Full of warmth, love, and support, this is an important story and an essential purchase.”

PUBLISHER’S WEEKLY – “Callender (King and the Dragonflies) excels, producing an exhilarating cast of queer characters, many of whom are people of color, who are as relatable as they are realistic, and a whodunit that will keep readers guessing to the last twist… This top-notch depiction of a messy, complicated, romantic young artist navigating the bumpy road to self-love and self-determination sticks its landing at every turn.”

BOOKLIST – “From its stunning cover art to the rich, messy, nuanced narrative at its heart, this is an unforgettable story of friendship, heartbreak, forgiveness, and self-discovery, crafted by an author whose obvious respect for teen readers radiates from every page.”

TV series in development at Amazon. 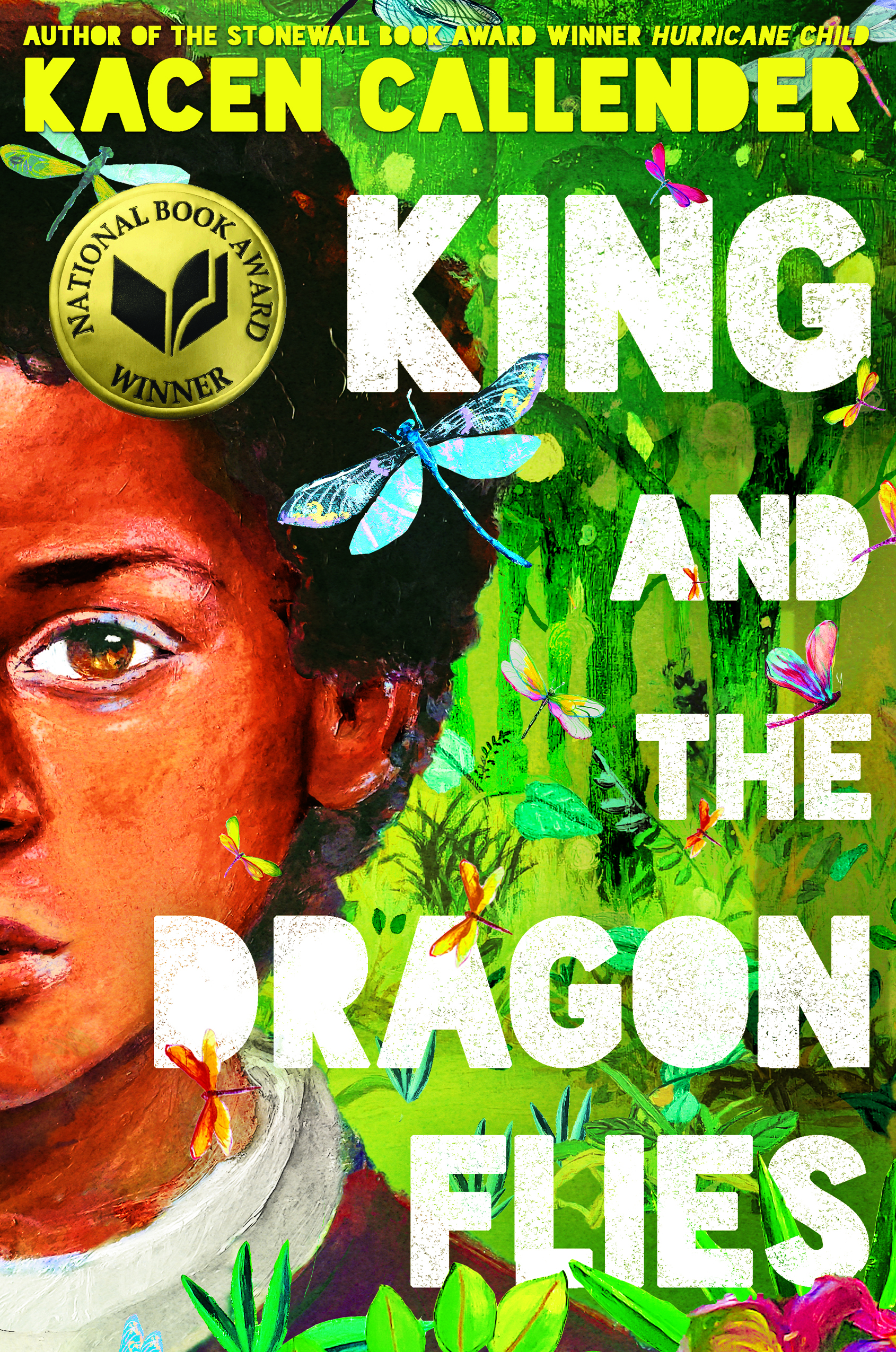 KING AND THE DRAGONFLIES

From the Stonewall and Lambda Book Award-winning author of Hurricane Child comes a novel about loss, grief, and finding the courage to discover one’s identity.

Twelve-year-old Kingston James is sure his brother Khalid has turned into a dragonfly after his sudden death, shedding what King considers was his first skin to live down by the bayou in their small Louisiana town. Khalid visits King in his dreams, but tells him not to tell anyone that he’s become a dragonfly, and so King keeps the secret to himself as he watches his parents evolve through their grief, and works through his own building anger and sadness at having lost his brother. To make matters worse, just days before his death, Khalid overheard King’s best friend Sandy telling King a secret—that he thinks he might be gay—so Khalid made King end their friendship. But when King finds Sandy hiding in a tent in his backyard, he agrees to help Sandy escape from his abusive father, and the two begin an adventure as they build their own private paradise down by the bayou and amongst the dragonflies. THE THING ABOUT JELLYFISH meets THE STARS BENEATH OUR FEET.

SCHOOL LIBRARY JOURNAL – “An intense, gripping tale of love, loss, and friendship featuring a black youth grappling with his dreams and his identity. Recommended for all middle grade collections.

SHELF AWARENESS – “Kacen Callender’s second middle-grade novel deftly confronts racism and homophobia as a black teen struggles to find “a new normal” after the sudden death of his brother.”

PUBLISHERS WEEKLY – “Callender…returns to middle grade in this powerful tale of grief, intersectional identity, and love.” 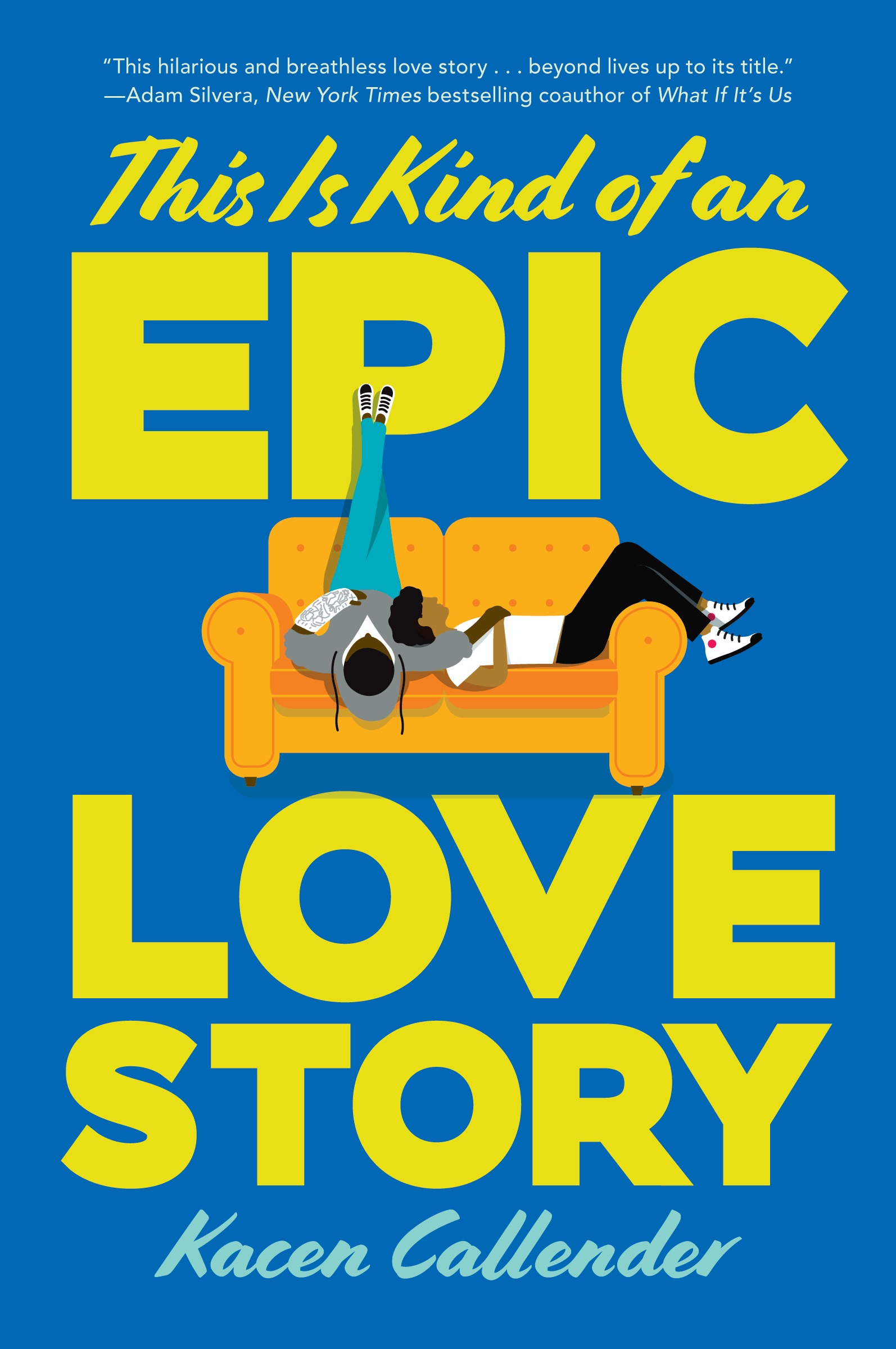 THIS IS KIND OF AN EPIC LOVE STORY

A fluffy romantic comedy that plays with the friends-to-lovers and second-chance tropes featuring diverse LBGTQ+ teens.

Nathan Bird is a film buff, but he’s a firm disbeliever in real-life happy endings. Still reeling from the death of his father and the recent demise of his relationship with his best friend Florence, he doesn’t always make the best choices and certainly not any that would paint him as a hero. But when his old childhood friend (and former crush) Oliver moves back into town, he’s faced with another chance to self-sabotage, or maybe instead, he’ll realize that sometimes when you fall in love, someone might catch you.

KIRKUS – “…a delightful cast of teenage characters who feel so authentic that readers will be scanning their school cafeterias for them. The author has a talent for capturing the earnest-yet-awkward cadence of teenspeak, and they explore the humor and pathos of adolescent relationships in a way that demonstrates a deep respect for the teen audience… A delightful testimony to the enduring power of love.”

NOTE: Sold in a pre-empt

A lyrical, debut middle grade novel with a touch of magical realism and LGBTQ+ themes, about first friendship, first love, and finding self-acceptance.

12-year-old Caroline Murphy is a Hurricane Child, having been born during a hurricane in the US Virgin Islands which is said to be a sign of bad luck. Caroline has certainly had her share: she’s hated by her classmates and was abandoned by her mother years before. She can also see things others can’t—at least until the new girl Kalinda crosses her path, who can see the same ghostly figures as Caroline. In the midst of a building hurricane and while discovering a crush on her new classmate despite the local homophobia, Caroline sets out to find her mother—and answers—once and for all.

SCHOOL LIBRARY JOURNAL – “An excellent and nuanced coming-of-age tale with a dash of magical realism for readers who enjoy character-driven novels, especially those with middle grade LGBTQ+ characterizations.”

KIRKUS – “Embedding [their] appealing protagonist in a fully realized Caribbean setting, Callender has readers rooting for Caroline the whole way.”